Show me your friends.

Show me your friends and I’ll tell you who you are.  Is this really a fair statement?

Tell us what you think by leaving us your comment. 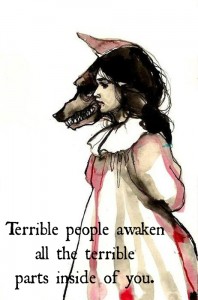 Are you who you surround yourself with?

Terrible people awaken all the terrible parts inside of you.

When I first read this, I was kind of torn, to be honest.  I sat and thought about it for quite a while and picked the statement to bits and pieces until I couldn’t deconstruct it any more.  I came to the conclusion that a whole book could be written based on this ten word statement.  Whenever I found myself agreeing with it, I just kept asking myself if it was really fair.  I mean, does the act of spending any kind of time with a “terrible” person really awaken our inner devil child?

I guess my first issue is simply in trying to qualify what a “terrible” person is.  What is terrible for me may not be so terrible for someone else and vice versa.  What pops into my head immediately is my friend’s horrible habit of parking in handicapped parking zones and other such offenses which might lead some to believe that she’s a rather insensitive person, maybe a jackass, and perhaps, on the whole, a pretty terrible person.  I guess it’s about personal perspective.  Here’s the thing – I think that some of what my friend does is pretty minor and other things she does, I wouldn’t be caught dead doing so though some might consider her to be a terrible person, I see it a little differently mostly because I know her very well and 99% of who she is is a kind, loving person.  Do her negative aspects awaken the terrible in me?  Nah, no parking in handicapped spaces for me, thank you very much.

Let’s shift to something more on a macro level though.  What happens if most of what you are surrounded with is negativity?  Do you become a product of your environment?  Now here’s an experiment that I think would be incredibly telling, and perhaps it’s already even been done – take a group of people who have lived their whole lives as socially “advantaged” individuals (in sociological terms, this is defined as Caucasian, middle/upper class, male, educated, and so on) who have never committed any terrible, heinous acts in their lives, and place them, for an extended period of time, in a “disadvantaged” environment where, by all standards, terrible acts (e.g. selling drugs to minors) are committed every day in the name of survival.  Would these previously pristine individuals come out of that kind of a situation the same people as they went in?  I seriously doubt it, particularly if they felt that they needed to become “terrible” people in order to stay alive.  Their perception as to what is defined as “terrible” would probably also change, wouldn’t it?

I personally believe that people largely become a product of their environment.  It’s not a hard and fast rule, of course, as we see many examples of lawyers and doctors coming out of ghettos and serial killers coming from upper class families, for example.  It is true though that on a personal level, when I am surrounded with positive people, I feel much more of my positivity coming to the surface.  On the contrary, in the times that I have been surrounded by negative people, I definitely feel my negativity pushing through.  Am I easily influenced by those around me?  Not really, but maybe somewhat.  Others may be less influenced by those around them, while still others much more so.  In the end, I guess there is some validity to the expression “Show me your friends I’ll tell you who you are”,  but let’s not forget that we can easily get tripped up in generalizations.  As William Blake said, “To generalize is to be an idiot. To particularize alone is a distinction of merit.”  ~ Gia